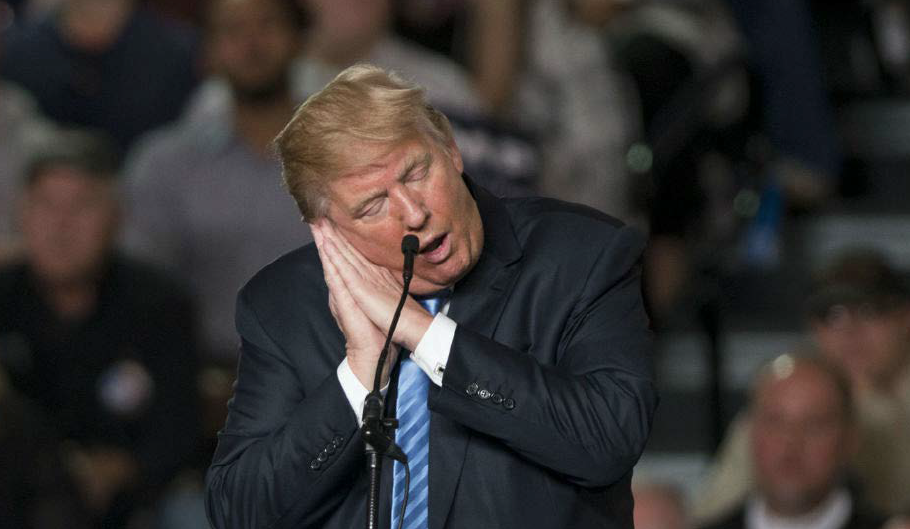 As Canadians, we sit back with beer in hand, (*insert team name here) hockey jersey on, orange-fingered and covered with the dust of cheezies (look it up), bemused as we channel surf during commercial breaks to catch glimpses of the chaos that is the American Presidential Election unfolding to the south of us.

I realize that we as outsiders should hold our opinions to ourselves. But come on… this is no ordinary election! Still, I will refrain from trashing/endorsing either candidate and instead, attempt to rationalize their behavior based on science. Ok, just Trump. I can’t explain Hillary.

As someone who specializes in fatigue management, perhaps I can shed some (blue) light on Trump’s communication style. Let’s look at the facts.

Fact #1. Last November, Trump eloquently bragged about his lack of need for sleep. “You know, I’m not a big sleeper,” he said. “I like three hours, four hours, I toss, I turn, I beep-de-beep, I want to find out what’s going on.”

Now we all like a good beep-de-beep now and again, but this lack of sleep has been an ongoing habit of his for over a decade. In 2004 in his bestselling book, Think Like a Billionaire, he wrote,

“Don’t sleep any more than you have to. I usually sleep about four hours per night.” There’s also been mention of him getting as little 90 minutes! Keep in mind that many groups use sleep deprivation as a form of mental torture.

There are two issues of concern with Trump’s slumber habits. First, he is not getting the essential amount of sleep for the brain and body to fully repair itself. The short term consequences will show up

in real time, such as impaired judgement (“I could stand in the middle of 5th Avenue and shoot somebody and I wouldn’t lose voters,“), trouble with complex decision making (“Rarely is the question asked: Is our children learning?”), reduced tolerances to stress and increased aggressiveness (“I’d like to punch him in the face”), and lack of memory consolidation (“I never said that”).

The long term consequences are even more devastating, with science now proving the link between restricted sleep and mood disorders, brain inflammation, and several dementias including the onset of Alzheimer’s.

And although research has yet to prove it, I’m sure there’s a connection to his hair.

Fact #2. Second, and by his own admission, he’s a twitter addict and famous for using technology in the middle of the night. All of our backlit devices (smartphones, tablets, laptops, e-readers) use blue LED. While any light exposure at night is bad, blue wave length is especially damaging as it prevents the production of melatonin, our body’s natural sleep hormone. It’s what helps us fall asleep and stay asleep. So even if he wanted to get more sleep, it could be possible that he can’t, and now he just believes (erroneously, as most people do) that his body doesn’t actually need more sleep than what it’s allowing him.

Now I can’t say for sure whether or not this is the case with Donald, nor am I suggesting he’s using these devices every night. He may have blue-blocking apps that reduce the blue light effect, or maybe he wears sexy orange tinted glasses to bed while tweeting out his latest gems, but even those controls won’t eliminate the problem completely.

I suppose that we have to acknowledge that he could be one of the approximately 1% that carries a mutation of the DEC2 gene which plays an important role in regulating daily total sleep time requirements. These individuals have been known to function at the same level of most people but with needing only half the sleep to fully recuperate instead of 8 like the rest of us, but only for the short term. The science is quick to point out that there will still likely be long term consequences related to health impacts if this pattern continues over time.

Ok, so maybe he’s a mutant. Again, not saying there’s anything wrong with that unless you’re taller than a skyscraper and eating Manhattanites for breakfast. Just making a point.

In summary, I have attempted to explain why Donald Trump may be exhibiting extreme temperaments, poor memory, and unclear thoughts at times. As for Hilary, a wikileaks document from 2011 reveals that she is regarded by her staff as a “champion napper” and big on caffeine to boost her alertness. If so, the drug test that Trump is insisting on may reveal nothing more than overdose of Starbucks (think Tim Horton’s with twice the flavour but four times the cost). Rumor has it, she can afford it.

This is not a judgement on either one’s political skills or presidential aspirations. Who am I to judge someone else’s country? Remember, I’m Canadian.