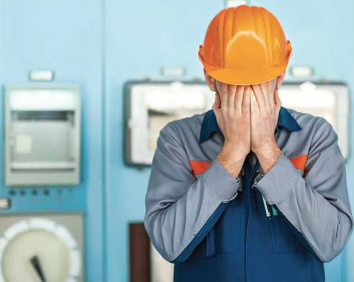 Mike was interviewed for the following article, published on the Business Insurance website in 2017. Author: Louise Esola

How much sleep are employees getting at night? Workplace safety experts are calling this one of the most frequently overlooked but critical questions to answer in employer safety programs due to rising fatigue risks.

The Park Ridge, Illinois-based American Society of Safety Engineers is funding an ongoing study on fatigue through the University at Buffalo in Buffalo, New York. The study, which began in August 2015, is surveying what workers think about fatigue and whether they can recognize the signs in their everyday work life, according to researcher Lora Cavuoto, an assistant professor in the university’s Department of Industrial and System Engineering.

Fatigue is often overlooked in safety programs because “it’s hard to pinpoint the instant it happens,” Ms. Cavuoto said.

“If we think about fall risk, a dominating injury, you can see those points; you can see you have a worker at height and know the mechanism for solving that. It’s fall protection,” she said. “Fatigue is a little more subtle and in the background. Workers might not be aware they are feeling the consequences (of fatigue).”

Michael Trufant, an Asheville, North Carolina-based fatigue awareness program manager for Aeroflow Healthcare Inc., which sells sleep apnea tests, called fatigue an “epidemic.” “You can wear your eye protection, but (fatigue) is where it is,” he said.

“A person who sleeps only four to five hours a day is the same as a (person with a) 0.08 blood alcohol level,” said Mr. Trufant, touting research that’s been echoed over the years by many safety organizations — from the U.S. Occupational Safety and Health Administration to the American College of Occupational and Environmental Medicine.

The Itasca, Illinois-based National Safety Council put the issue on the forefront of its agenda recently. In 2016, the nonprofit tackling workplace safety issues launched a fatigue initiative, providing statistics on how prevalent the issue is becoming in a report issued in July. And this fall, it is launching a fatigue calculator for employers to gauge how tired their employees are and what risks are created as a result of fatigue.

“The tired employees are increasing safety risk,” said Emily Whitcomb, an Itasca-based senior program manager with the fatigue initiative. “Employers are becoming more interested in this issue (because) of the major consequences it leads to.”

“That’s scary if you are doing a safety-critical job,” she added. The council also narrowed down a list of nine risk factors that contribute to the likelihood of an accident occurring at work — a list that includes long shifts, demanding jobs and long commutes. “Nearly everyone (at 97%) reported at least one risk factor, and 80% reported at least two. With that, your risk factor increases,” Ms. Whitcomb said.

Experts have long pointed to such high-profile incidences as the Chernobyl nuclear disaster in Russia, the Three Mile Island nuclear accident in Pennsylvania, the Exxon Valdez oil spill off Alaska and even the most recent string of collisions at sea involving U.S. naval vessels.

“When we look at the largest incidents in the world, all of them are fatigue-related,” said Mike Harnett, Calgary, Alberta-based vice president of human factors for Six Safety Systems Inc., which delivers solutions in the United States and Canada to reduce worker fit-for-duty risks associated with drugs, alcohol and fatigue in the workplace.

“We constantly blamed the operator, but it’s the flaws in the system we have to look for,” said Ms. Harnett. “That’s not human error; they fell asleep because they were not getting enough sleep.”

The council’s research found that 16% of workers surveyed reported at least one near miss or safety incident because of fatigue.

Ms. Whitcomb said much of the problem exists in current employment culture, which is shifting slowly.

“The hard thing with fatigue is we always see that pushing ourselves, putting sleep to the side, is seen as a badge of honor,” she said. “If you lose sleep and put in your overtime, people think it will pay off in the end.”

Ms. Harnett said corporate policymakers and executives are often behind the curve, as many have “gone through” fatigue to find success. “The harder and the longer they worked, the better it was for promotions,” she said. “We have to convince management they have a problem.”

The latest interventions can be as simple as a questionnaire for workers on sleep habits, both before or after an incident, Ms. Harnett said. Another solution is to train employees on the importance of sleep and to limit longer shifts, she added.

Experts say a burgeoning area is in research and testing for sleep apnea and other conditions that can cause a person to be tired during a workday.

“What we are trying to do is get employers to push sleep health programs and sleep screening,” said Ms. Whitcomb. “We found that 90% of sleep disorders are untreated.”