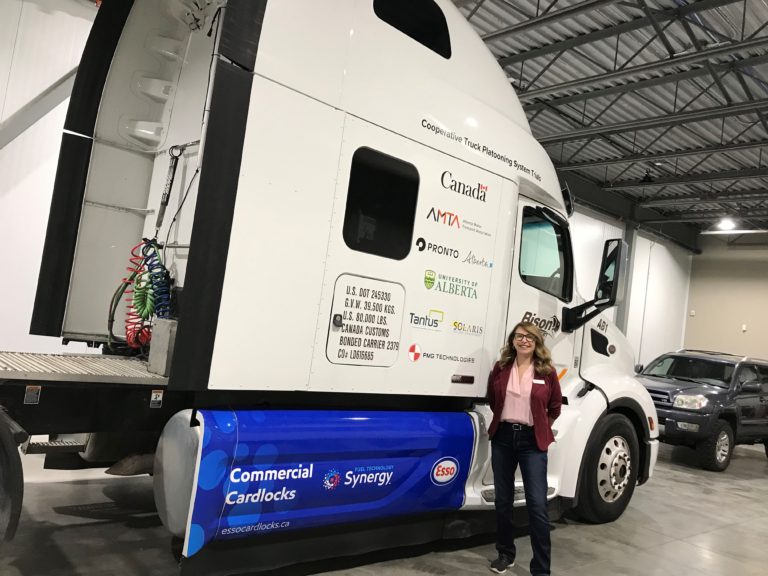 Mike Harnett poses with one of the two Cooperative Truck Platooning System trucks.

Minister Sawhney is well aware of what that means for women in both leadership roles, and women in the logistics and supply chain.

“I’ve been an advocate for women, probably since the day I was born,” she said.

With a start in finance, Minister Sawhney identified more opportunities in the world of oil and gas and with the help of a government grant, earned an internship to get her foot in the door.

“I was working with a group of engineers and geologists and geophysicists – very technical [and] predominantly male,” she explained. “[There were] a few women and it was quite challenging because I was trying to juggle motherhood and childcare and family, as well as with a new internship, but I was so determined to prove myself. I even used to work on the weekends on my projects and focus on my presentation skills so that I would be deemed worthy to hire on full-time, and I was hired on full-time.” 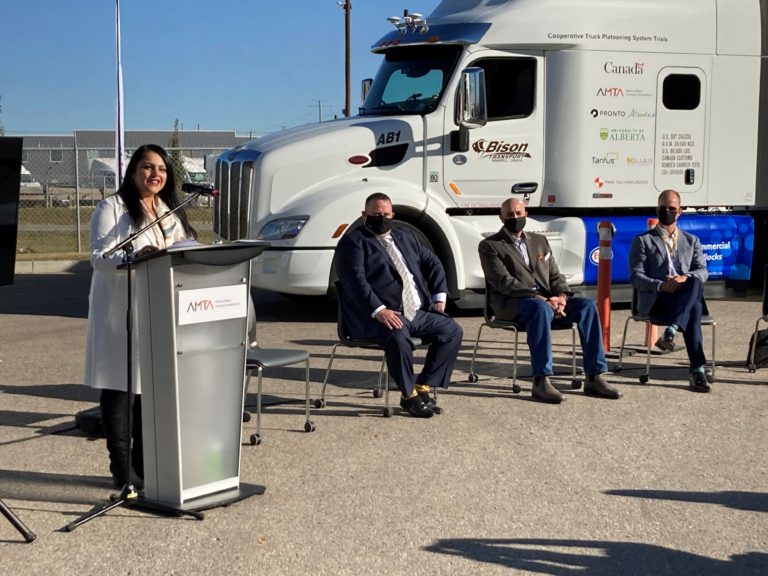 Statistics show commercial transportation is also a predominantly male workforce. According to statistics from Trucking HR Canada, women make up a mere 3.5 per cent of truck drivers in Canada, compared to 16 per cent in trucking and logistics and 48 per cent across all industries in the country.

A 2020 report compiled by Trucking HR and the Alberta Motor Transport Association (AMTA), Recruiting and Retaining Diverse Communities: An Employer Roadmap breaks down those statistics even further. The report states women in freight transportation make up 1.5 per cent of automotive service, truck and bus mechanics; 19.1 per cent of managerial staff; 38.7 per cent of dispatchers and 20.2 per cent of parts technicians.

BJ Zoobkoff found her way into commercial transportation by chance. Moving to Calgary to be closer to her father, she utilized a staffing agency and received a call for a one-year contract at a warehousing company.

“I had never had an interest in transportation and warehousing but was up for the challenge and it was close to home, so it was the perfect fit for me,” she said. “When my contract was about to finish, the company offered me a full-time position. At first, I thought ‘this is great, I will try this for another year and see where I land’. Here we are over 20 years later and I’m still loving it.

“It was not only all the daily challenges that made me fall in love with this industry, it was the relationships I got to build with fellow coworkers and customers. It was knowing that this was an industry that would always be thriving.” 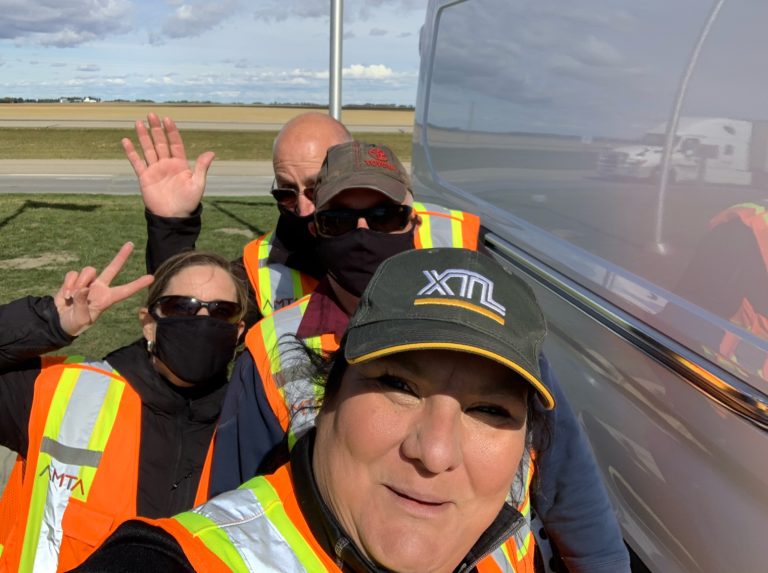 Fostering relationships within a chosen industry and with other women is wisdom shared by Minister Sawhney. She suggests for women looking for a change of career or to better their circumstances, they talk to women both in their network and outside of it.

“Change is always really difficult,” Minister Sawhney continued. “And we tend to make it really scary in our minds and we go down the worst-case scenarios about all the things that could possibly go wrong, but in reality those things never happen and things are always much more smoother than we could imagine.”

For women looking to make a change, commercial transportation is an industry looking for employees.

In October 2021, Trucking HR Canada released a Labour Market Information snapshot stating in the second quarter of 2021, there were more than 18,000 driver vacancies in Canada. The report said while that number is expected to “ease slightly” after 2021, it is still projected there will be an average driver vacancy of 28,000 jobs between 2021 and 2025.

There are a number of initiatives both industry and government are working on to get more people behind the wheel.

The Alberta Government’s Driving Back To Work Grant is one of those initiatives. Unemployed Albertans have access to grant funding to take Mandatory Entry Level (MELT) training to obtain their Class1 license. The grant opened to receive new applicants on Oct. 1, 2021.

Another option, Women Building Futures, has programming for unemployed or under-employed women, including a Class 1 Driver class. The eight-week class is offered in Calgary, Edmonton, Fort McMurray and Lethbridge.

Commercial transportation offers a broad expanse of career opportunities, not just in driving, but in mechanics, administration, management and more, with opportunities to grow in a role, as experienced by Zoobkoff.

After being laid off in 2016, Zoobkoff was beginning to think it was time for a change in field when she got a call from Jason Fisher with XTL Transport.

“As soon as I started at XTL, something told me this was going to be my career, my forever place of employment,” Zoobkoff said. “And here we are five years later and I have gone from dispatching, to human resources and office administrator then human resources and safety admin\manager – which I did for 3.5 years. As the company continued to grow, we split the HR and Safety roles and I have now taken on the role of Safety Management for our Airdrie Terminal.”

Another burgeoning field in commercial transportation is that of Research and Innovation. Mike Harnett is president of Solaris Fatigue Management, a key partner in the AMTA-led Cooperative Truck Platooning System (CTPS) project.

“I always say, this career chose me, I didn’t choose it,” she said.

In her first job after graduating, Harnett focused on injury prevention with a Canadian railway company after a tragic incident with a freight train in which 23 people were killed.

“After an intense investigation, over 300 contributing factors were identified, but the key contributors to this tragic event was a combination of poor work culture and fatigued workers,” Harnett explained. “From there, I was sent to Washington DC and Michigan to learn about these emerging topics called Human Factors and Ergonomics, and leaders in Australia were beginning to share their initial studies in Fatigue Management. They were really in their infancy. I’ve been augmenting my education and learnings ever since.”

The CTPS project is Canada’s first on road trail that introduces driver-assist technology to allow close-proximity following in platoon formation, reducing drag, and increasing fuel efficiency. Other sensors, radar and camera technology will send information between the trucks to ensure safe operations including active braking and acceleration systems responding to any acceleration and deceleration by the lead vehicle.

Over 175 closed track tests were conducted ensuring the platooning technology is safe for vehicle operators as well as the motoring public. CTPS will be unique in its study of human factor considerations and will be conducted during different seasons – including cold Alberta winters.

In her early years, Harnett said she often was the only woman in safety meetings or on industrial sites, “surrounded by men who had their own ideas of how things should be done. I was constantly wondering why we were doing things a certain way, but I was intimidated and felt I didn’t have a voice.”

She explained she found a strong mentor in her first boss who encouraged her to challenge the status quo and helped guide her through the “landmines”.

“I continue to challenge the status quo to this day; sometimes successfully, sometimes not. But we only learn from our mistakes,” Harnett explained. “So, if you’re passionate about what you do and want to be a leader, don’t just walk into the shallow end to test the waters. I’m talking about taking a three story skydive into the deep end of the pool with a cannonball finish. Be brave. Be fearless. And if you belly flop? Well, it will only hurt for a minute.”

The importance of having and/or being a good mentor is a sentiment echoed by Minister Sawhney. She explained it is incumbent on women in power to open doors for other women, and not just be a mentor, but a sponsor who takes that extra step to introduce women to opportunities that could help elevate their position.

“I will say something a little provocative here, and it’s not just for women, its for men too,” she said. “Sometimes when people reach a certain level, they are protective of the systems that allows them to get to that level and they don’t think about knocking down systemic barriers so other people can enter into that same arena.”

“I think part of being a strong leader, an influential leader, is making sure that you bring people along with you, you improve the situation of as many people as you can while you’re in your position.”